The Hottest Rock & Roll Book of the New Milleneum!

ART OF MODERN ROCK: THE POSTER EXPLOSION is set to be the first and last word on the finest rock concert posters of the past fifteen years, a period of unprecedented explosion in poster-making activity for both the biggest names in rock as well as the most highly regarded new rock acts.

A massive 11" x 13", 492-page book, this long-anticipated sequel to rock historian Paul Grushkin's ART OF ROCK: POSTERS FROM PRESLEY TO PUNK, considered the bible of rock poster art worldwide, is the must-have book for rock music fans and poster collectors.

This spectacular work will include eyeopening posters for rock's greatest bands (Rolling Stones, Phish, Metallica) and the most exciting new bands (Queens of the Stone Age, White Stripes, The Strokes) on tour and at key gigs.

Modern rock posters, while wildly individual, encompass cutting-edge stylistic approaches and a daring, often controversial use of imagery. Authors Paul Grushkin and Dennis King, two of rock's premier historians and experts on rock & roll art, gathered the posters from nearly 8,000 submissions worldwide, and provide the critical overview and augmented, detailed profiles of the artists as well as commentary on key works.

They have dug up spectacular treasures, and persuaded the prominent artists to allow their best and most sought-after works-including the great limited-run screenprints-to be included. ART OF MODERN ROCK is a bona fide publishing event.

Paul Grushkin, who has spent 25 years as head of sales for the largest rock & roll merchandising companies (Winterland, Sony Signatures), authored the immense ART OF ROCK, which is the standard work worldwide on rock posters. He is the co-author, with Joel Selvin, of TREASURES OF THE HARD ROCK CAFÉ, and with Cynthia Bassett and Jonas Grushkin, of GRATEFUL DEAD: THE OFFICIAL BOOK OF THE DEAD HEADS.

Dennis King is an internationally recognized authority on contemporary posters; rock & roll posters, graphics, and screenprints, and Japanese popculture artifacts. He maintains one of the largest private poster collections in the world. King operates the D.King Gallery in Berkeley, CA, which services an extensive poster-related website at www.dking-gallery.com, and sponsors the highly respected informational site rockpostercollector.com.

Wayne Coyne, founder and lead singer of The Flaming Lips, authored the preface to ART OF MODERN ROCK. The band has excelled in modern, alternative rock for nearly 20 years. The Flaming Lips was founded in 1983. The band plans to release a feature-length film, "Christmas on Mars" later this year.

Noted Coyne in his preface, "Rock posters have hypnotic powers. Maybe it's the different dimensions of the lettering, or maybe it's the colors the artists use, or maybe it's because of some strange, unintentional miracle in their design, but I've believed in them and have wanted to leap (into their world) and infuse myself with them. In some respects the birth of what would end up being The Flaming Lips was conceived in those moments. Not by the posters alone, but by seeing first hand-like the posters-how one could self-create oneself."

To be published by Chronicle Books
November 1, 2004 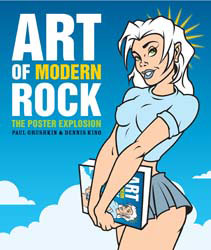